Model trains have been popular additions to many homes for decades, ever since Lionel created the first electric version in 1901 to dazzle the eyes of children passing by storefront windows. Trains today come in endless varieties, sizes, and styles, but they all have the same standard operations.

A model train works by sending an electrical current from a wall outlet into the tracks, through the wheels, and to a motor that powers the train. The motor turns a screw and cog, which rotates the axel and makes the train move. The model train’s track looks and works just like a real train track.

In this article, I’ll explain in detail how model trains are powered and how they operate. I’ll also discuss some of the different types of model trains available on the market today.

While there are some battery-powered trains on the market, they’re mostly considered children’s toys and aren’t the same quality as a model train. Most models are powered by electricity from your home’s wall outlet.

Let’s take a look at the parts of the train’s electrical system.

The power cord has an attached transformer that changes the current of electricity coming from the wall. This is why you’re able to touch the train track once you’ve run power to it without getting shocked.

A controller controls the power coming from the transformer that’s fed to the track. It acts like the gas pedal in your car – the car is constantly receiving power, but it doesn’t move until you press the gas pedal.

The wires from the controller are connected to the track by a power feed. These can be attached by a clip or soldered into place, depending on the manufacturer and type of model.

According to Model Railroader, “good electrical connections are a key to a smooth-running model railroad.” Watch this video on YouTube about attaching feeder wires to the model train’s track for more information:

To attach the track segments and make sure the electrical current can pass through, a metal clip called a “fishplate” is used. The joints on real train tracks are also called fishplates.

Switching the controller to the opposite direction reverses the electrical current’s flow, which allows the train to move forward and backward on the track. This simple direct current (DC) system means that all trains on the same track must move in the same direction, at the same speed, at the same time.

More modern designs include Digital Control (DCC) models. In this setup, each individual locomotive has a mini-computer inside that the controller communicates with through the power signals on the track. This allows the operator to control each train individually based on their settings.

For a great starter train that you can run right out of the box with these advanced features (including Bluetooth technology), I recommend this Lionel Santa Fe Set . 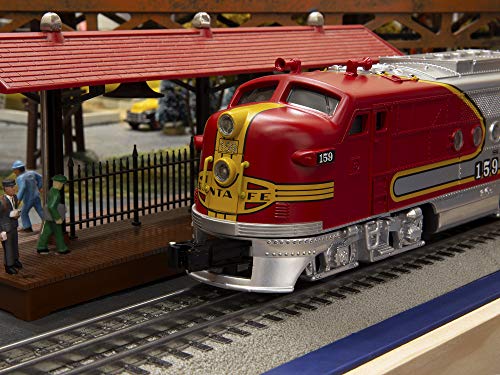 You can even control this train with your mobile device! It’s great for beginner hobbyists or a child that’s interested in a more realistic train set.

For more information on model train circuitry, check out the YouTube video below by That Model Railway Guy, where he explains how to wire a model railway from start to finish:

Then, once you’re ready to start building, take a look at Andrew Duckworth Electronics and Wiring for Model Railways is an excellent resource for getting the layout and circuitry right, which is always one of the biggest challenges for hobbyists.

How a Model Train Motor Works

Watch this YouTube video by Sam’s Trains to see different types of motors over the years and see what the inside of a model train looks like:

How a Model Train Track Works

A model train track is a miniature version of a real train track. The wheels sit on the track the same way that a full-size locomotive does.

Model train scale standards are regional and are defined by an official organization that operates in the hobbyists’ area.

For example, in Europe, the MOROP publishes NEM standards for scale. Scale is the proportion or ratio of the model train to the actual train, known as the prototype.

In the United States, the NMRA published a standardized scale system in the 1940s. The two scales are similar but do have a few differences.

Here’s the standard NMRA scale used by most model railway builders in the US, showing the scale, scale to foot, and proportion:

Model train scales vary in size and compatibility with tracks and other equipment. Some scales are more common than others, so there’s more variety of materials to choose from.

This LGB Freight Set is ready to run right out of the box. It includes 12 pieces of curved track, light, smoke, and sound.