Knowing how much nitro fuel to buy can be tricky. You don’t want to run out while playing, but you don’t want to buy in bulk to save money and have it go bad. So before buying or storing Traxxas Nitro Fuel, it’s good to know how long it will last.

Traxxas Nitro Fuel will go bad, but how long it remains good depends on how well you store it. Moisture, temperature swings, and direct light affect how long a nitro fuel lasts. To make the fuel last longer, keep the sealed container in a dry, cool area that doesn’t have huge temperature swings.

No matter how much fuel you buy, you want to make it last. I can’t tell you how much to buy, but I can help you keep it fresh. To do that, I’ll explain why all nitro fuels go bad, how to store them, and how you can tell it has gone bad. Then, you can decide whether to use the fuel you just found or whether to buy in bulk.

Unfortunately, all nitro fuel will eventually go bad. So the question is, why do some last longer than others?

If you hang out with other RC Racers and bring up the subject, you’ll get a range of answers, everything from one to two years to thirty.

I’ve heard people brag about finding fuel from the mid-90s that still works. But other racers say that fuel over half a year old is not good.

But all racers agree that it must go bad at some point. So, why is that?

To understand why all nitro fuels will eventually go bad, you need to know what’s in the fuel. Like all RC fuels, Traxxas Nitro has three main components: nitromethane, methanol, and lubricants.

The proportions might vary somewhat, and some fuels will contain additives, but those three are essential. Let’s talk more about each of them.

People call it nitro because of the nitrogen molecule. The oxygen in nitro means less atmospheric oxygen is required for it to burn. Indeed, nitromethane without additional oxygen is still highly combustible, which is why it was once used as rocket fuel.

Although nitromethane is highly flammable, its flash point is 95° Fahrenheit, so it’ll catch on fire if you try to ignite it. (It needs to reach temperatures close to 800° Fahrenheit before it ignites by itself.) Still, store it like any flammable liquid.

Nitro is used to increase an engine’s power through a complex interaction between ethanol and nitromethane. Fuel with more nitro has more oxygen, which causes a quicker burn, higher rpm, and more horsepower. However, with the faster burn comes more heat, and too much heat stresses the engine. So, choose a fuel with the appropriate amount of nitro for what you want to do.

Serious racers will go up to 40% Nitro, knowing they’ll have to rebuild their engines more frequently. However, I recommend that beginners start with a fuel that has 20% nitro, such as the Traxxas Top Fuel. 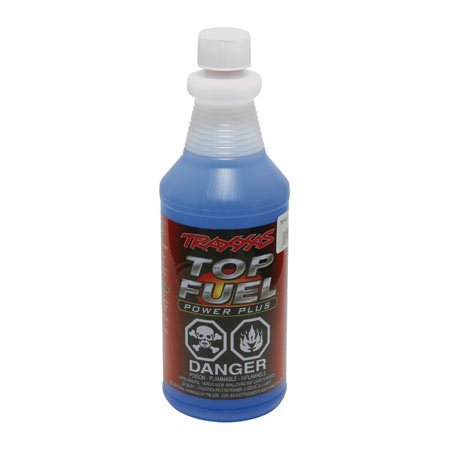 The primary ingredient in RC fuel is methanol, also called methyl alcohol. It consists of carbon, oxygen, and hydrogen (CH₃OH) and pulls oxygen from the air to propel your car. Although your racer can run on methane alone, the nitro gives the boost you want.

Methanol is a hygroscopic fuel, one that easily attracts and absorbs water in the air. If the container holding nitro fuel isn’t sealed correctly, water will enter the fuel, thereby spoiling it.

This is the number one reason that nitro fuel goes bad. Now, if that’s the case, why not use gasoline instead?

There are two chief reasons. First, methanol releases 5 to 10% more energy by weight than gasoline, and weight is an enemy of speed. Second, igniting methanol is easy with your glow plug.

Since two-stroke engines don’t have separate crankcases for oil, the lubricant needs to be added to the fuel.

Castor oil is a popular lubricant because of its high boiling point (595°F or 312.778°C). It has a rich history in the modeling community, having been used as a lubricant in model airplanes starting in the 1940s. However, castor oil leaves a gummy residue, so most fuel manufacturers use a blend of synthetic and castor oils to achieve heat resistance and keep the engine from getting gummed up.

Racers will sacrifice engine wear and tear for better performance so that they’ll buy nitro fuel with lower lubricant percentages. They get more speed and know they’ll have to rebuild the engines more frequently.

Fuel manufacturers often add several additives to improve performance and improve the life of the engine. Top Fuel, for example, adds the following:

How Should I Store My Traxxas Nitro Fuel?

To store nitro fuel properly, you need to protect it from three things — air, light, and extreme temperatures, with air being the number one culprit in nitro fuel going bad.

So if the bottle hasn’t been opened, then storing it is a matter of protecting it from light and extreme temperature changes. Check to make sure it’s still sealed tightly, and don’t forget to keep it in a cool, dry place.

Protecting your fuel from air is priority number one. If the container is already opened, is there anything you can do besides sealing it tightly? That depends on who you talk to.

You’ll hear people who say you need to take the air out before sealing it, but I’ve never figured out how to do so. Others will tell you to store fuel in a metal gas can. I personally think that’s taking it to extremes.

First, not all metal gas cans are airtight. Second, unless your gas can is much smaller than the jug your fuel came in, you’re introducing the fuel to more air. For example, if your gallon of Traxxas Top Fuel container is half full and you pour it into a two-gallon gas can, you’ve added more air to your nitro fuel.

You’ll hear that you should not store your nitro on a concrete floor.

This is like the advice you shouldn’t store car batteries on concrete. When car batteries were made with inferior materials, they could develop cracks in the material, especially if the concrete became damp. Also, older plastic fuel bottles would occasionally leak, but this isn’t a problem with newer containers.

Still, old habits die hard. If it makes you feel better, store your nitro in a cardboard box and wrapped in a towel to avoid wild temperature swings.

Light affects the nitro, so store it in a dark area (or put the container in a cardboard box). Remember that nitro adds a kick to the fuel, so your car will still run—just not as fast.

Temperature swings affect the oil in nitro fuel, so find a place to store the fuel where it won’t be subjected to them.

How Do I Know My Nitro Fuel Has Gone Bad?

Nitro fuel should be clear.

But what if it isn’t? Does that mean it’s bad?

Not necessarily. The first thing to do is warm it to room temperature. If the fuel clears up, it’s still good. Uneven coloring or globs of gel floating in the fuel is a sign it might be going bad.

If you leave nitro fuel in the tank of your RC racer, it’ll go bad quickly. You’ll know this is the case if the fuel is orange and you have a hard time getting your car to start. Your best bet at that point is to drain it and put fresh fuel in your vehicle.

What Should I Do if My Nitro Fuel Has Gone Bad?

If you think your fuel has gone bad, you have several options.

What Should I Do With Old Nitro Fuel?

What to do with old fuel depends on where you live and what type of drop-off facilities are nearby. If your area has drop-off sites for oil and hazardous fuels, then you could take it there. If not, most quick oil places or car dealerships will dispose of it.

But whatever you do, don’t use it as lighter fluid or add it to fire, as that is extremely dangerous.