RC cars have boomed as a hobby in the past decades, and you may have seen RC cars that run on fuel similar to that used by cars. They sound cool and produce exhaust like regular cars, but is the fuel at all similar to that you’d use in your regular car?

You can use the same gas in your RC car as you use in your regular car only if the RC car is designed or modified to do so. The average nitro car is powered by a fuel composed of nitromethane, methanol, and oil. If gasoline is used in a nitro engine, it will damage the engine.

In this article, I’ll be covering the differences between nitro fuel and gasoline, as well as relevant topics surrounding fuel-powered RC cars.

Electric engines have taken the RC world by storm, but that doesn’t make nitro cars any less relevant than they used to be. Nitro RC cars have combustion engines that burn fuel to power themselves, whereas electric RC cars run exclusively on batteries.

Nitro cars offer a unique experience that electric cars simply can’t provide: plumes of strong-smelling exhaust, realistic sounds like real cars, and all the tinkering that comes with fuel-powered engines. Many people enjoy nitro RC cars as replacements for their own cars.

It’s worth noting that while nitro cars were once much faster than electric RC cars, in recent years they lag significantly behind. This isn’t to say that you can’t buy a hobby nitro RC car and make it go 60 mph (96.56 kph) – you just won’t be breaking any world records.

Nitro engines have also been called ‘glow engines’ because of the ‘glow plugs’ that they use in place of spark plugs that regular cars use. Such plugs are usually made of iridium or nickel, whereas regular spark plugs are made of copper, and nickel is used as an outer plating.

A more involved area of fuel-powered RC cars are those powered by gasoline. More commonly, this is large-scale model cars such as ⅕ scale. Smaller-scale models don’t generally take gasoline fuel mixtures unless they’re specifically modified to do so, and even then, it doesn’t take straight gas to run.

RC engines that use gasoline mixtures to run have spark plugs like regular cars, rather than glow plugs like RC nitro engines. The difference between them is primarily the composition of the coils – glow plugs use iridium and nickel, whereas spark plugs are typically platinum.

RC cars that run on gasoline don’t only use gasoline. These cars usually have a modified version of what’s called a two-stroke engine, which is a kind of engine that uses a mixture of gasoline and oil to run.

The gas is to provide power to the combustion engine and the oil lubricates the moving parts of the engine to reduce damage caused by high amounts of friction. Other examples of machines that take gasoline and oil are weed wackers and lawnmowers.

Most ⅕ scale model cars take about a 40:1 fuel mixture, meaning 40 parts gasoline and 1 part oil. In many cases you can find oil sold as ‘premix oil’ to be mixed into gasoline to be used as fuel for lawn equipment. These premix oil bottles usually come with instructions about how much gasoline to mix with certain amounts of the oil mixture.

When in doubt, always check the specifications that come with your car. There should be detailed specifications and instructions on how to fuel and run your car out of the box.

A very easy way to tell if a car you just bought or are considering buying takes nitro or gasoline is what scale is your rc car. Scale models of 1/16th, 1/10th, and even 1/8th are most likely to be simple nitro-powered cars. Bigger models, most commonly 1/5th scale, are more likely to take gasoline as fuel.

Nitro fuel sold online and in hobby shops vary mostly in the percentage of nitromethane – 10% is about the lowest you’ll come across and 40% is likely the highest nitro mixture you’ll find.

For the average nitro car owner, 20-25% mixtures are a perfect sweet spot. You don’t want too much nitromethane in a regular hobby car because it can affect the engine, and too low of a nitro mixture won’t provide your car with the power it needs.

What kind of oil is inside Nitro Fuel?

Most nitro fuel has either synthetic oil or castor oil, which mix with the fuel to lubricate the moving parts of the engine and keep it cooked at high running temperatures.

Many RC nitro cars use castor oil because the engines don’t have a very efficient cooling system compared to RC planes. Castor oil isn’t that great at low operating temperatures, but a mixture of synthetic and castor oil best protects the engine at both low and high temperatures.

Do Nitro RC Cars Use the Same Fuel As RC Planes?

Nitro RC cars should not use the same fuel as RC planes; they should only use fuel advertised as nitro fuel for RC cars. Using RC plane fuel could lead to damage of the inner workings of your engine because RC plane fuel typically uses more synthetic oil and other different ingredients in its fuel. 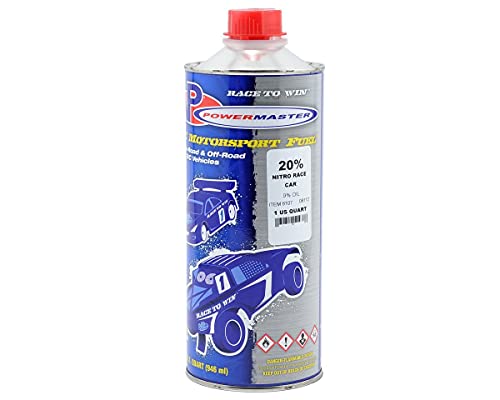 The reality is that, at best, it would work, but at worst you could damage your car’s engine. Just to be on the safe side, I don’t recommend you try using plane fuel.

While many cars these days run on just batteries, it’s worth considering if you still need batteries to run an RC car that primarily uses nitro fuel or gasoline to run. The answer is: yes, you still need some amount of electric power to make your car work.

Think about this – your car has circuits, servos, and receivers, right? Those are parts that liquid fuel can’t operate, so you’ll need to make sure you have enough power from batteries to get going and stay running at peak performance.

Many ⅕ scale model cars use 5-cell packs of NiMH batteries, which provide a total of 6 volts. In some cases, you can get away with 2 LiPo cells, which give more power with less total weight. However, not all cars are compatible with LiPo cells. 2 cells provide 7.4 volts of power, which not all receivers are compatible with. 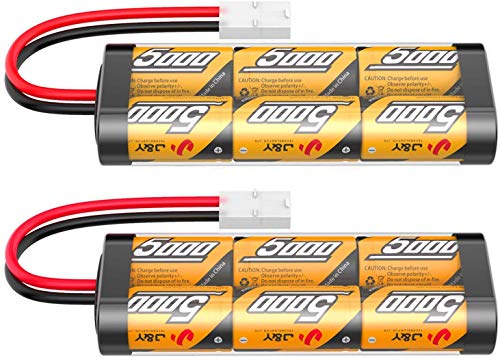