Remote control planes are a great hobby and pastime. They’re also a lot of fun to fly around the house or yard. However, it can be difficult for beginners to get the hang of how remote control plane steering works.

Aircraft RC steering works by sending radio waves to the receiver, which then translates them into commands for the vehicle or plane. The system allows the use of remote control or radio-controlled devices to act as if their operator directly controlled them.

RC steering is the process of controlling a remote-controlled vehicle or aircraft with a handheld device, such as a gamepad. This type of steering can be used for many different purposes, and it has been around for a while. Read on for in-depth explanations of how it works, causes and fixes to twitching servos, and ways to balance your steering servo.

What Is RC Aircraft Steering?

RC aircraft steering is accomplished by moving the rudder stick, which moves the tail surface to either side. It’s a modern-day technology that enables planes to be flown by someone who’s standing on the ground while controlling it as if they were in an actual plane up in the sky!

When you move the rudder right, for instance, it moves left on your plane and causes air to hit that rear of your plane on its left wing at a higher gravity than the other and make it turn towards a right angle with respect to its line of motion.

How does RC Aircraft Steering work?

Well, RC planes are flown just like any fixed-wing aircraft. They’re equipped with flaps at the bottom or top of wings (or both) that can be lowered in varying degrees when low speed is desired; increasing power will cause more lift until stall speed is reached.

That’s just one method, here are other ways most people use when flying planes:

How Do You Use RC Steering?

To use an RC steering to control your plane, you’ll need a transmitter. An RC transmitter sends signals from one or two sticks that send information back to servos. The aircraft’s motorized components move accordingly and change direction based on the input given by the pilot’s joysticks.

In a typical RC steering setup, the left stick controls which direction your plane moves, while the right stick is used to control elevation or height, such as going up or down.

To move forward on land, use only one throttle curve for smooth directional control while adjusting speed with the other throttle curve.

To land your RC plane on the ground, first cut the throttle to zero. You can use your right stick for this maneuver and lower your elevation as needed.

For R/C planes that have flaps: To move up, push down on the left paddle, which adjusts the elevator servo and adjust power accordingly with right thumb control; same goes for when going down but reverse lever directions (push the right side).

Keep in mind that flaps are directional, so they only work when the aircraft is not moving perpendicularly across their direction axis.

RC steering does not work alone, and it’s best when used in tandem with other control surfaces. The rudder, elevator, aileron, and throttle all play an integral part in RC steering.

So, if you’re trying to fly your remote-controlled plane but can’t steer it properly, try depressing one of the two sticks more than the other. This will make that side dip lower while the opposite goes higher.

If you want to get fancy, use both feet on the ground for better balance so that pushing up will give more pressure on only one side. You’ll also need to experiment a little bit by going back and forth between these techniques until you find which suits your style most!

How Do You Center an RC Steering Servo?

Servos are a common component in RC (radio-controlled) vehicles and planes. They serve a variety of functions, but their primary purpose is to control your vehicle’s steering.

Most RC servos are powered and installed in a fixed position at the center of gravity of the plane, which means that you’ll need to install it on one side or the other.

To center an RC steering servo, follow these steps:

When centering the steering servo, it would help to ensure there’s a strong beam holding up by drilling through both sides of your cabin when securing with nuts and bolts, make sure all holes and gaps are closed.

You can also install a small metal rod without worrying about it bending or breaking, so long as there is enough space for movement.

Why You Should Center an RC Servo

If your servo is imbalanced, the car or plane will be very difficult to control. For example, a plane with unbalanced servo may move up and down uncontrollably. Generally, a motor that suffers from uncontrolled oscillations must work that much harder and run that much hotter to function properly.

Not only are these differentially imbalanced motors less efficient, but they can also damage themselves because of how violent their shaking gets. Therefore, it’s best always to ensure your RC servo is centered.

Why Is My Steering Servo Twitching?

The reason why your steering servo is twitching is because it acts as though it has power even when it doesn’t. There’s always some residual energy left over from when the servo was last powered up, which can cause them to twitch or make noise, even after you think it’s off.

Here are six scenarios that can cause an RC steering servo to twitch:

1. The Servo Is Not Receiving Power

Suppose a battery powers your servo. The servo might twitch if the connection to the power source (either from your transmitter or motor) has come loose, preventing it from getting enough juice and causing excess voltage stress on the wires.

2. The Batteries Are Drained

The batteries may be drained too low for proper operation of the steering servos.

If you have an RC plane that uses rechargeable batteries, consider this one possible cause of twitching when not in use; some batteries don’t work well at very low charge levels and may start acting funny once their power gets drained.

If you need to replace the batteries, I recommend this Tenergy 6V Rechargeable Battery Pack from Amazon.com. Rest assured of a durable power supply, thanks to the battery’s 2000mAh capacity. It’s also compatible with most RC models. 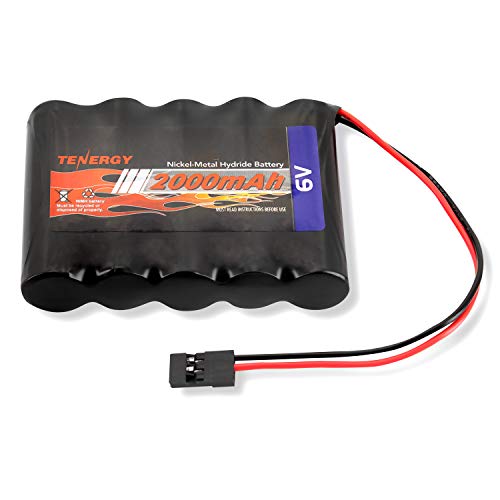 The receiver’s “pulses” might not match the pulses of the transmitter. This may happen if you have a really old radio system that uses analog modulation.

If this is happening, your steering will twitch and shake because there’s nothing to stop it from moving when false signals are coming in on your control channel.

If there are magnets near your servos, chances are you’ll notice some twitching.

To address this, make sure the servos are placed away from any motors, speakers, and other electronics–especially those that use ferromagnetic materials to function properly.

How Do I Reset My Steering Servo?

To reset your steering servo, rotate it from left to right to reset it. If that doesn’t work, try using a different battery. A third way is to either turn the trim dial on the transmitter or change to a preset function on your RC with a center position (most likely between 90° and 270°).

Therefore, you can hand-move the steering stick forward and back without running into anything first. It’s easiest to set this up in advance of needing it by going into mode setup for one of the presets (either 1 or 2 – check your owner’s manual) and making sure there is an endpoint between 180° to 360°, preferably not too close to either end.

If the methods I’ve mentioned don’t work, you may need a Phillips screwdriver and one of the spare screws from your RC to address the issue.

Now, you should’ve centered your steering servo and be able to steer it without any worries.

Alternatively, here’s a 5-minute YouTube video explaining how to center your servo:

How Do You Set Steering Endpoints?

For example, on an oval course, it’s usually wise to have some turn coming out of each straightaway so you can line up well for the next turn without having to go off track.

After setting those points, take several laps around whatever environment you plan on racing in, just using only throttle and steering inputs from these endpoints (which is what most people will do when driving their model). If everything seems good, go ahead and set up your other endpoints (brake/throttle) to match.

Alternatively, you could use your radio unit’s built-in RC steering endpoint controls.

The RC steering endpoints are the limits that you set for your plane’s turning radius. The lower limit is called the ‘min’, and it indicates where the plane will stop if turned in a clockwise direction.

Similarly, the upper limit is called ‘max’, indicating how far around the circle to go before reversing back down from an anticlockwise turn.

It helps to think of this as a wheel on a car when driving forwards; there needs to be enough room for people or objects (or any other obstruction) which may get in its way. Likewise, when driving backward, we need space at both ends, so we don’t run into anything (like bushes).

Having said that, the RC steering endpoints are critical to your model. If you have too much slop, you’ll be over-controlling, with every little movement of the sticks producing too much throw, too fast a throttle, and so on.

Conversely, if you have too little slop, your movements will be too small to make meaningful control inputs. You want to set them as close to the point where it’s effective but not over-reactive or under-sensitive as possible.

Most radios have a menu with an option for “End Point Adjustment”, which can be found in either the transmission setup menus or under transmitter programming options; this is where you’ll find controls to adjust how sensitive steering inputs are as well as how fast they return to the center after being turned all the way left or right. Basically, it’s just two sliders that control these aspects of your radio’s response curve separately from each other.

Note that there is a tradeoff here, as sensitivity can make the steering heavier and more difficult to control. A faster return time can sometimes cause “bounce” in response when turning from one direction to another.

How Do I Choose the Right Servo for My RC Plane?

To choose the right servo for your plane, first determine if you need a sturdier control or more precision. A digital servo offers better throttle and rudder control. On the other hand, analog servos provide more precision with controls such as moving flaps.

Additionally, analog servos have a more fluid movement than digital ones; however, they’re also not as sturdy or strong. Digital servos are faster and stronger, but you’ll notice that they don’t have as fluid a movement, making them less ideal if you’re looking for delicate movements in your plane.

RC planes are a lot of fun to fly, but they can be tough to steer. The following tips will help you fly your RC plane with more ease: